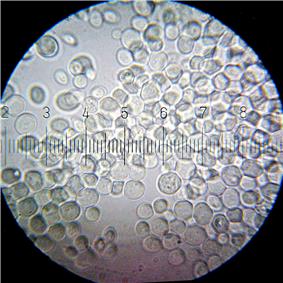 Baker's yeast is the common name for the strains of yeast commonly used as a leavening agent in baking bread and bakery products, where it converts the fermentable sugars present in the dough into carbon dioxide and ethanol. Baker's yeast is of the species Saccharomyces cerevisiae,[1] which is the same species (but a different strain) commonly used in alcoholic fermentation, which is called brewer's yeast.[2] Baker's yeast is also a single-cell microorganism found on and around the human body.

The use of steamed or boiled [4] or sugar in a bread dough provides food for the growth of yeasts; however, too much sugar will dehydrate them.[5] Yeast growth is inhibited by both salt and sugar, but more so with salt than sugar.[6] Fats, such as butter or eggs, slow down yeast growth;[7] however, others say the effect of fat on dough remains unclear, presenting evidence that small amounts of fat are beneficial for baked bread volume.[8]

Saccharomyces exiguus (also known as S. minor) is a wild yeast found on plants, fruits, and grains that is occasionally used for baking; however, in general it is not used in a pure form but comes from being propagated in a sourdough starter.

A block of compressed fresh yeast in its wrapper

It is not known when yeast was first used to bake bread; the earliest definite records come from Ancient Egypt.[9] Researchers speculate that a mixture of flour meal and water was left longer than usual on a warm day and the yeasts that occur in natural contaminants of the flour caused it to ferment before baking. The resulting bread would have been lighter and tastier than the previous hard flatbreads. It is generally assumed that the earliest forms of leavening were likely very similar to modern sourdough; the leavening action of yeast would have been discovered from its action on flatbread doughs, and would have been either cultivated separately or transferred from batch to batch by means of previously mixed ("old") dough. Also, the development of leavened bread seems to have developed in close proximity to the development of beer brewing, and barm from the beer fermentation process can also be used in bread making.

Without an understanding of microbiology, early bakers would have had little ability to directly control yeast cultures, but still kept locally interesting cultures by reusing doughs and starters to leaven later batches. However, it became possible to isolate and propagate favored yeast strains in the same manner as was done in the beer industry, and it eventually became practical to propagate yeast in a slurry with a composition similar to beer wort, usually including malted barley and wheat flour. Such cultures (sometimes referred to in old American cookery as "emptins", from their origins as the dregs of beer or cider fermentation) would become the ancestors of modern baker's yeast, as, in general, they were carefully maintained to avoid what would later be discovered to be bacterial contamination, including using preservatives such as hops as well as boiling the growth medium.

In the 19th century, bread bakers obtained their yeast from beer brewers, and this led to sweet-fermented breads such as the Imperial "Kaiser-Semmel" roll,[10] which in general lacked the sourness created by the acidification typical of Lactobacillus. However, beer brewers slowly switched from top-fermenting to bottom-fermenting yeast (both S. cerevisiae) and this created a shortage of yeast for making bread, so the Vienna Process was developed in 1846.[11] While the innovation is often popularly credited for using steam in baking ovens, leading to a different crust characteristic, it is notable for including procedures for high milling of grains (see Vienna grits[12]), cracking them incrementally instead of mashing them with one pass; as well as better processes for growing and harvesting top-fermenting yeasts, known as press-yeast.

Refinements in microbiology following the work of Louis Pasteur led to more advanced methods of culturing pure strains. In 1879, Great Britain introduced specialized growing vats for the production of S. cerevisiae, and in the United States around the turn of the century centrifuges were used for concentrating the yeast,[13] making modern commercial yeast possible, and turning yeast production into a major industrial endeavor. The slurry yeast made by small bakers and grocery shops became cream yeast, a suspension of live yeast cells in growth medium, and then compressed yeast, the fresh cake yeast that became the standard leaven for bread bakers in much of the Westernized world during the early 20th century.

During World War II, Fleischmann's developed a granulated active dry yeast for the United States armed forces, which did not require refrigeration and had a longer shelf-life and better temperature tolerance than fresh yeast; it is still the standard yeast for US military recipes. The company created yeast that would rise twice as fast, cutting down on baking time. Lesaffre would later create instant yeast in the 1970s, which has gained considerable use and market share at the expense of both fresh and dry yeast in their various applications. 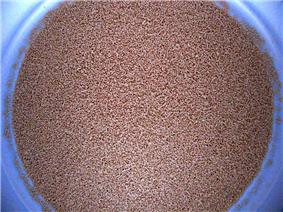 Active dried yeast, a granulated form in which yeast is commercially sold

Baker's yeast is available in a number of different forms, the main differences being the moisture contents.[15] Though each version has certain advantages over the others, the choice of which form to use is largely a question of the requirements of the recipe at hand and the training of the cook preparing it. Dry yeast forms are good choices for longer-term storage, often lasting more than a year at room temperatures without significant loss of viability.[16] In general, with occasional allowances for liquid content and temperature, the different forms of commercial yeast are considered interchangeable. 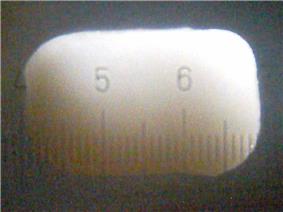 A single grain of active dry yeast. The numbered ticks on the scale are 230 µm apart

For most commercial uses, yeast of any form is packaged in bulk (blocks or freezer bags for fresh yeast; vacuum-packed brick bags for dry or instant); however, yeast for home use is often packaged in pre-measured doses, either small squares for compressed yeast or sealed packets for dry or instant. For active dry and instant yeast, in general a single dose (reckoned for the average bread recipe of between 500 g and 1000 g of dough) is about 2.5 tsp (~12 mL) or about 7 g (1⁄4 oz), though comparatively lesser amounts are used when the yeast is used in a pre-ferment. In general, a yeast flavor in the baked bread is not noticeable when the bakers' percent of added yeast is less than 2.5%.[22]

Because it is readily available and easy to culture, baker's yeast has long been used in chemical, biological, and genetic research. In 1996, after 6 years of work, S. cerevisiae became the first eukaryote to have its entire genome sequenced. It has over 12 million base pairs and around 6000 genes. Since then, it has remained in the forefront of genetic research. For example, most of our knowledge of the cell division cycle was worked out from experiments with yeast.

Reduction of a carbonyl to a hydroxyl with baker's yeast.

Baker's yeast contains ethanol via fermentation for use in chemical synthesis, although doing so in some places requires permits. Baker Yeast also used in the bio-remediation of Arsenic (III) from the ground water that contains toxic Pollutants.[24]

The baking industry relies on industrial production of its ingredients, including baking yeasts. Much effort has been put into developing and marketing yeasts that will perform reliably in mass production. Since the end of the nineteenth century, baker’s yeast has been produced by companies that specialize in its production.

In 2012 the companies that dominated the market included: Lesaffre Group, AB Vista, DSM, GB Plange and AB Mauri, producing hundreds of thousands of metric tons of yeast each year in industrial plants.