Corvus is a small constellation in the Southern Celestial Hemisphere. Its name comes from the Latin word "raven" or "crow". It includes only 11 stars with brighter than 4.02 magnitudes. One of the 48 constellations listed by the 2nd-century astronomer Ptolemy, it remains one of the 88 modern constellations. The four brightest stars, Gamma, Delta, Epsilon, and Beta Corvi from a distinctive quadrilateral in the night sky.

Corvus, Crater, and other constellations seen around Hydra in Urania's Mirror (1825).

The Greek figure of Corvus is modeled on the Babylonian Raven (MUL.UGA.MUSHEN), which was similarly placed sitting on the tail of the Serpent (Greek Hydra). The Babylonian constellation was sacred to Adad, the god of rain and storm; in the second Millennium it would have risen just before the start of the autumnal rainy season.[1]

One myth associated with Corvus is that of Apollo and Coronis. Coronis had been unfaithful to her lover, who learned this information from a pure white crow. Apollo then turned its feathers black in a fit of rage.[2]

Another legend associated with Corvus is that a crow stopped on his way to fetch water for Apollo, in order to eat figs. Instead of telling the truth to Apollo, he lied and said that a snake, Hydra, kept him from the water, while holding a snake in his talons as proof. Apollo saw this to be a lie, however, and flung the crow (Corvus), cup (Crater), and the snake (Hydra) into the sky. He further punished the wayward bird by making sure that it would forever be thirsty, both in real life and in the heavens, where the Cup is barely out of reach.[2]

In Chinese astronomy, the stars of Corvus are located within the Vermillion Bird of the South (南方朱雀, Nán Fāng Zhū Què).[3]

In Indian astronomy, the first five stars of Corvus correspond to the Hastā, the 11th nakshatra or lunar mansion.[4]

Covering 183 square degrees and hence 0.446% of the sky, Corvus ranks 70th of the 88 constellations in area.[6] It is bordered by Virgo to the north and east, Hydra to the south, and Crater to the west. The three-letter abbreviation for the constellation, as adopted by the International Astronomical Union in 1922, is 'Crv'.[7] The official constellation boundaries, as set by Eugène Delporte in 1930, are defined by a polygon of six segments (illustrated in infobox). In the equatorial coordinate system, the right ascension coordinates of these borders lie between 11h 56m 22s and 12h 56m 40s, while the declination coordinates are between -11.68° and -25.20°.[8] Its position in the Southern Celestial Hemisphere means that the whole constellation is visible to observers south of 65°N.[6][1] 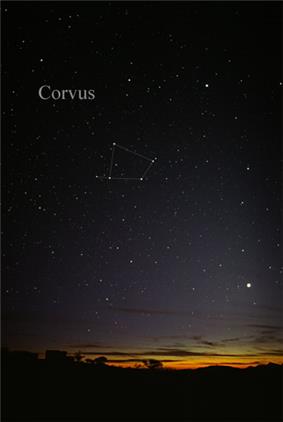 The constellation Corvus as it can be seen by the naked eye.

31 Crateris (which was originally placed within in Crater) is a 5.2 magnitude star which was once mistaken for a moon of Mercury.

The Antennae peculiar galaxy, NGC 4038 and 4039, consists of two interacting galaxies that appear to have a heart shape as seen from Earth. The name originates from the huge tidal tails that come off the ends of the two galaxies, formed because of the spiral galaxies' original rotation. Both original galaxies were spiral galaxies and are now experiencing extensive star formation due to the interaction of gas clouds. The galaxies are 45 million light-years from Earth and each has multiple ultraluminous X-ray sources, the source of which is unknown. Astronomers theorize that they may be a rare type of x-ray emitting binary stars or intermediate-mass black holes.[13] The Antennae galaxies appear in a telescope at the 10th magnitude.[2]

The center of Corvus is home to a planetary nebula NGC 4361. The nebula itself resembles a small elliptical galaxy, but the magnitude 13 star at its centre gives away its true nature.