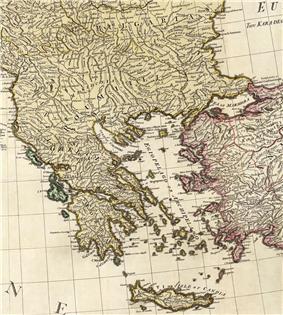 Despite their different dialects, koineization in Ancient Greece enabled the various Greek political entities to maintain commercial and diplomatic relations.

In linguistics, a koiné language (κοινή common language in Koiné Greek) is a standard language or dialect that has arisen as a result of contact between two or more mutually intelligible varieties (dialects) of the same language.[1][2]

Normal influence between neighbouring dialects is not regarded as koineisation. A koiné variety emerges as a new spoken variety in addition to the originating dialects; it does not change any existing dialect. This separates koineisation from normal evolution of dialects.[3]

Koiné Greek then went on to become the language of the Macedonian empire, and was widely used as a second language (though it did get some native speakers).

The term ‘koine’ (meaning ‘common’ in Greek) was first used to refer to the form of Greek used as a lingua franca during the Hellenistic and Roman periods.[4] It arose as a mixed vernacular among ordinary people in the Peiraieus, the seaport of Athens, which was inhabited by Greeks from different parts of the Mediterranean.[5][6]

Through koineization, new dialect varieties are brought about as a result of contact between speakers of mutually intelligible varieties of that language. Koineization is a particular case of dialect contact, and how it typically occurs in new settlements to which people have migrated from different parts of a single language area. Koineization typically takes two or three generations to complete, though it can be achievable within the first generation.[7]

Language variation is systematic, in that it can be related to social divisions within a community, such as class and gender. Change can be shown to originate with particular social groups based on these divisions. However, a number of linguists have recently argued that language change lies with the individual.[8][9]

Kerswill also examines the Norwegian dialects that emerged in two towns which were located around smelters built at the head of the Sørfjord branch of the Hardangerfjord in the mid-twentieth century. The towns, Odda and Tyssedal, both drew migrants from different parts of Norway. The workers in Odda came predominantly (86%) from western Norway. In Tyssedal only about one-third came from western Norway; a third came from eastern Norway; and the rest from other parts of the country. The dialects that evolved in these two towns were thus very different from each other.[11]

Peter Trudgill sees three processes in operation during what Mesthrie calls the accommodation period: mixing, leveling and simplification. The processes of leveling and simplification are both dependent on a wide range of factors, including the differential prestige related of the contributing dialects, socio-political contexts in which the new dialect develops, and individual networks of adults involved in the accommodation process. Additionally, both Trudgill and Mesthrie also comment on the process of reallocation, in which features that have been retained from contributing dialects take on new meanings or functions within the new dialect.[12]

Trudgill posits a multi-generational model of the development of a koiné. During the first (i.e., immigrant) generation, the speakers of the contributing dialects mix, and there is some leveling. The first native-born generation of speakers continues the leveling process. However, in the instances Trudgill was able to document (e.g., first generation speakers of Tyssedal and Odda dialects of Norwegian), the speech of this generation still reflected considerable variability in use of marked forms, both between speakers and in the repertoire of individual speakers.

It is the third generation that focuses the variations and stabilizes the dialect. Trudgill admits that there are cases where the focusing can take place in the first generation of native-born speakers and also instances where it might be in the fourth or even later generations. The dialect in its emerging state, a state marked by heterogeneity of forms, Trudgill calls interdialect, often called an interlanguage in other dialect studies.[13]