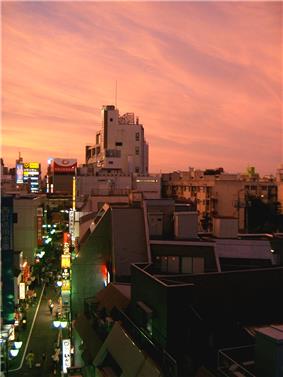 Sunset over Nakano, with Nakano Broadway in the distance

Nakano (中野区, Nakano-ku) is a special ward in Tokyo, Japan. In English, it calls itself "Nakano City".[1]

The ward was founded on October 1, 1932 when the towns of Nogata and Nakano were absorbed into the former Tokyo City as Nakano Ward. The present administration dates from March 15, 1947 when the Allied occupation reformed the administration of Tokyo-to.

Rivers include the Kanda, Myosho-ji and Zenpuku-ji Rivers, and the Aratama Waterway.

Complicated bus network is constructed in all Nakano Ward because most rails lay only east and west.