The Tōkaidō Shinkansen (東海道新幹線) is a Japanese high-speed Shinkansen line, opened in 1964 between Tokyo and Shin-Ōsaka. Since 1987 it has been operated by the Central Japan Railway Company (JR Central), prior to that by Japanese National Railways (JNR). It is the most heavily travelled high-speed rail route in the world by far; its cumulative ridership of 5.3 billion passengers dwarfs all other systems and lines worldwide.[1][2] 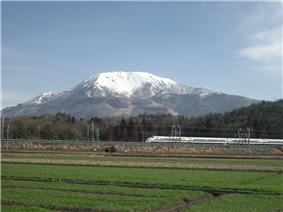 Mt. Ibuki and the Tokaido Shinkansen

There are three types of trains on the line: from fastest to slowest, they are the Nozomi, Hikari, and Kodama. Many Nozomi and Hikari trains continue onward to the Sanyō Shinkansen, going as far as Fukuoka's Hakata Station.

700 series and N700 series train sets operate on the line in any of the three service patterns. The Hikari run from Tokyo to Osaka took four hours in 1964; this was shortened to 3 hours 10 minutes in 1965. With the introduction of high-speed Nozomi service in 1992, the travel time was shortened to 2 hours 30 minutes. The introduction of N700 series trains in 2007 further reduced the Nozomi travel time to 2 hours 25 minutes. As of 14 March 2015, after a speed increase to 285 km/h, the fastest Nozomi service now takes 2 hours 22 minutes from Tokyo to Shin-Osaka.

As of August 2008, Hikari services travel from Tokyo to Shin-Osaka in approximately 3 hours, with all-stopping Kodama services making the same run in about 4 hours.

All Tokaido Shinkansen services are scheduled to be operated by N700A series or N700A series trainsets by the end of fiscal 2019.[6]

The back cover of the first English-language timetable with the Tokaido Line Shinkansen service which launched on October 1, 1964.

The Tokaido Shinkansen line was originally conceived in 1940 as a 150 km/h (93 mph) dedicated railway between Tokyo and Shimonoseki, which would have been 50% faster than the fastest express train of the time. The beginning of World War II stalled the project in its early planning stages, although a few tunnels were dug that were later used in the Shinkansen route.

Construction of the line began on 20 April 1959 under JNR president Shinji Sogō and chief engineer Hideo Shima. It was completed in 1964, with the first train travelling from Tokyo to Shin-Osaka on 1 October 1964 at 210 km/h (130 mph). The opening was timed to coincide with the 1964 Summer Olympics in Tokyo, which had already brought international attention to the country. Originally, the line was called the New Tokaido Line in English. It is named after the Tokaido route of Japan, used for centuries. Speeds have been increased to 285 km/h (177 mph), except for lower limits applying between Tokyo and Shin-Yokohama and in densely populated urban areas around Nagoya, Kyoto and Shin-Osaka stations.[7]

A new Shinkansen stop at Shinagawa Station opened in October 2003, accompanied by a major timetable change which increased the number of daily Nozomi services.

All Tōkaidō Shinkansen trains to and from Tokyo make station stops at Shinagawa and Shin-Yokohama. (Before March 2008, alternating Nozomi and Hikari services stopped at either or both of these stations.)

A new station, Minami-Biwako, was planned to open in 2012 between Maibara and Kyoto to allow a transfer to the Kusatsu Line. Construction started in May 2006, but in September 2006, the Ōtsu district court ruled that the ¥4.35 billion bond that Rittō city had issued to fund construction was illegal under the local finance law and had to be cancelled. The project was officially cancelled in October 2007.[8]

An ultra-fast (500 km/h (311 mph) plus) maglev system, the Chūō Shinkansen, has been committed to construction, with a target date of 2020 for the line to start partial operation, and 2027 to connect Tokyo with Nagoya.[12]

It was announced in June 2010 that a new shinkansen station in Samukawa, Kanagawa Prefecture was under consideration by JR Central. If constructed, the station would open after the new maglev service begins operations.[13]

In December 2013, JR Central president Yoshiomi Yamada announced the operating company's intentions to raise the maximum line speed beyond 270 km/h, with a revised timetable to be introduced in spring 2015.[14] In February 2014, JR Central announced that, from spring 2015, the maximum speed would be increased to 285 km/h (175 mph) for services using N700A or modified N700 series trains.[15] Initially, just one service per hour will run at 285 km/h, with more services gradually added later.[15]